Germany parties differ greatly in how they advertise on Facebook. The conservative CDU targets individual regions, the left-wing SPD tailors its adverts by gender. The far-right AfD has a totally different approach.

Germany’s political parties have so far spent more than €800,000 on Facebook adverts in the run-up to the European elections. That is according to the advertising report published by the social network, which Der Spiegel has analysed.

Spending almost €10,000, the AfD lies just behind Volt and DiEM25. That could be because AfD has just not needed Facebook adverts: many users simply share AfD posts anyway. A study recently showed that 85% of all Facebook posts created by political parties and shared by users were from the AfD.

German parties have taken very different strategies with their Facebook campaigns. That becomes clear if you you compare their total spending with the number of individual adverts: The CSU, the Bavarian sister party of the CDU, spent just over €41,000 for exactly 20 adverts on Facebook. That’s more than €2,000 per advert. In contrast, the CDU and SPD split their six-figure ad budgets between thousands of individual adverts, meaning they spent on average less than €20 per advert.

Facebook provides parties and other advertisers with a bespoke tool that allows them to decide which target groups should receive each advert and how much money they want to spend on them. In other words, how many users the adverts should be shown to.

The data published by Facebook shows that the CDU, SPD, FDP and the Greens make lots of smaller payments. Using thousands of individual adverts gives them a way of determining particular key groups – what’s known as targeting. The data shows that:

Perhaps the best-known purpose of targeting is to personalise adverts, whether based on gender, location or a whole host of other specificities that Facebook knows about its users. However, when taken to extremes, targeting can be misused so that an advert’s content is tailored to defined audiences – and even in contradiction to those adverts received by other target groups. These ‘dark ads’ were, for example, used in the US presidential election in 2016 and in the run-up to the Brexit referendum. Their effectiveness is disputed.

The label ‘dark ads’ comes from a time when there was no way of knowing which adverts the managers of Facebook pages had used. In preparation for the German general elections in 2017, a crowd-sourcing project collated data on the advertising strategy of political parties with the help of volunteer Facebook users. The library of adverts published in the run-up to the European elections is a conscious step Facebook has taken to cast more transparency over this area.

Targeting as a tool for voter mobilisation

A first look at the data has not revealed any signs that German parties were using targeting to deploy adverts with different content to different target groups. It does not appear that there are different electoral pledges just for men or just for women. But several parties target non-native speakers in Germany using adverts in the language of their country of origin.

Above all, they use targeting in the campaign to reach particular key audiences more strongly. If polling experts find, for example, that young women in large cities might well sympathise with a particular party, but often do not actually go to vote, the party can use Facebook as a way of boosting turn-out: This demographic could have a particularly high number of adverts without the content of those adverts having to be tailored to them. The Greens use geotargeting to this end, sending more adverts “where the potential is particularly high”, a spokesperson said.

Targeting by age group has only been rarely used in Germany’s European elections. But the age breakdown for many adverts shows that parties use other characteristics alongside location and gender to reach target groups. 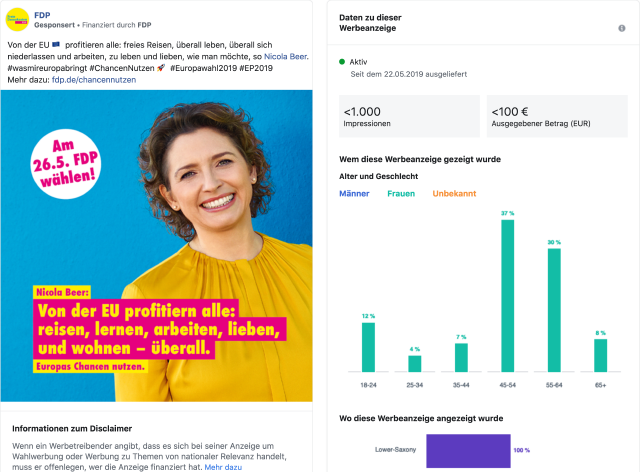 The screenshot above shows an advert for the FDP that was shown to women in Lower Saxony. Most of the people who saw the advert are between 45 and 64 years old. While other age groups were not excluded from the target audience, they are strongly under-represented.

This effect can come about when target groups are narrowed down with other user data. For example, adverts might only be shown to female users who liked the Facebook page of a particular music band or company. It this page had an audience mainly consisting of middle aged men, that would be reflected in the audience for those targeted adverts.

It would be interesting to find out which of these targeting techniques the parties use. But Facebook has refused to publish the exact targeting of political adverts. Even the parties themselves are rather reluctant to answer questions. An SPD spokesperson said that the party’s adverts “are oriented around people’s multiple interests”. The CDU said that it uses “possibilities for targeted addressing of voters in order to talk to people about the issues that matter to them” within the data protection framework.

The Left Party said that it does use adverts specific to target audiences but not to ‘custom audiences’. Through that method, Facebook offers the option of creating a new target audience that resembles an existing audience group. It allows email lists to be uploaded, for example newsletter subscribers. If they have a Facebook account, a new target group can be automatically created with similar users on the basis of their characteristics and interests.

The FDP said that it uses targeting by gender and region, including through custom audiences. These are, however, based only on users who “interact with our content on Facebook”, for example by liking the FDP Facebook page. Email addresses of supporters are not uploaded.

Parties have placed different emphases on political issues in their Facebook adverts, as shown by analysis carried out by the European Data Journalism Network, which Der Spiegel belongs to. The parties represented in the Bundestag have the following priorities:

Adverts that appear without text and only convey their message through images or video have not been studied for this analysis. For that reason, it was not possible to reliably assess the priorities of the CDU: a majority of the party’s Facebook adverts consisted of videos without any accompanying text.

Parking spaces reserved for private companies to be cut

COVID-19: Harvard and MIT sue US government over...

Analysis: Should children go back to school during...