Charles Michel goes multi-speed to get Europe ahead on climate

On his debut as European Council president, Charles Michel revved up a multi-speed Europe.

With a crafty scheme to give Poland a reprieve from implementing a new climate target that EU leaders adopted early Friday, Michel embraced a highly controversial approach fiercely opposed by his predecessor, Donald Tusk — permitting different standards for different EU countries, depending on their willingness to embrace EU initiatives.

Michel and his advisers insisted that Poland had agreed to the EU’s overall goal of becoming climate neutral by 2050, and that the summit conclusions merely recognized that Warsaw could not commit to that target domestically right now.

But that position was flatly contradicted by Polish Prime Minister Mateusz Morawiecki who said: “The conclusions give us enormous flexibility.”

“Poland has achieved an exemption from the EU commitment to reach climate neutrality by 2050,” he said, adding that the country was free to address climate change at its own speed. “We will be able to conduct the transformation in a way it’s safe and economically beneficial for Poland,” he said.

Asked if Poland would be ready to sign on by June, when Michel said the Council would revisit the issue, Morawiecki offered no guarantees, saying that discussion will be “an overview” of EU climate policy and provide an opportunity to discuss more details. “The costs of the transformation have to be provided and will be provided by the EU,” he said.

But while Michel’s clever maneuver allowed him to boast that the EU unanimously agreed to new, more ambitious climate targets for 2050 — to become the first major economy to reach net-zero greenhouse gas emissions — other EU officials and diplomats were surprised at his assertion that there was complete agreement.

And some said that he appeared to have set an extraordinary, and potentially dangerous, new precedent for the functioning of the European Council, which requires unanimity of all EU member countries for most decisions. (In some limited circumstances, the heads of state and government can act by qualified majority voting but that was not the case for the climate targets.)

“It can be the start of a new approach — the unanimity with opt-outs,” one EU diplomat said. 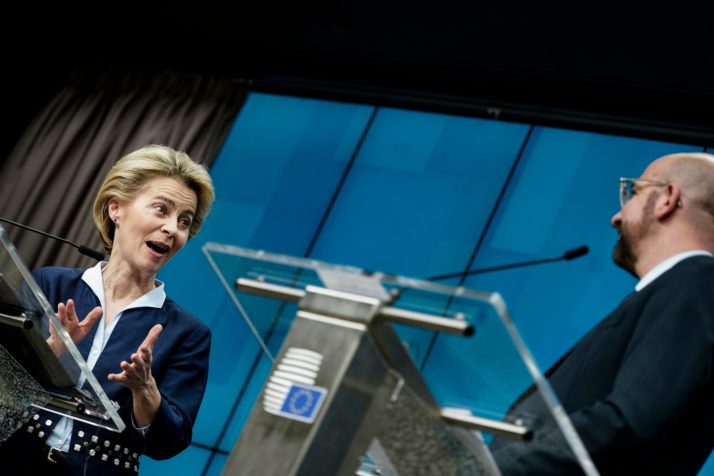 “I’m a bit worried because there’s some name and shame in this approach” a second, senior diplomat added.

The senior diplomat noted that Poland was not singled out in the Council’s written conclusions, but Michel and new European Commission President Ursula von der Leyen as well as other leaders openly discussed Poland as the sole hold-out in the climate debate. Last June, Hungary and the Czech Republic had joined Poland in blocking the Council from adopting the new targets. This time all three came into the debate skeptical or opposed but Michel won over the other two countries with new language that they had favored on nuclear energy.

A third EU diplomat said that the climate debate was a test case for the functioning of the new EU leadership teams, at the Commission and at the Council, which took office on December 1.

Climate was “a way to assess something else,” this diplomat said. “How many leaders upstairs do you think are really interested in climate?” the diplomat said, adding that the focus was really on power games, and an effort to gauge who was now calling the shots in Brussels.

Some diplomats and officials said Michel’s approach was long overdue and a refreshing effort to break the stranglehold that more combative EU countries have imposed on policymaking by exploiting the requirement of unanimity.

Aides to Michel said that he was absolutely intent on showing the Council to be taking an ambitious step on the climate issue, following von der Leyen’s unveiling on Wednesday of her ambitious European Green Deal — a sweeping package of 50 initiatives to ramp up the EU’s fight against climate change.

But some diplomats and officials said that Michel had forced the debate on climate targets unnecessarily and that an alternative approach would have been to allow the Commission and the European Parliament to begin legislative work on the European Green Deal, while heads of state and government pushed forward with a debate on the EU’s next long-term budget, known as the Multiannual Financial Framework (MFF) .

“Poland will be achieving climate neutrality at its own pace” — Mateusz Morawiecki, Polish prime minister

That budget negotiation will include talks on a Just Transition Fund, intended to help countries green their economies. Poland cited the uncertainty about the size and scope of the fund as one reason why it was unwilling to sign on to the 2050 target.

“There was more than one leader thinking that this discussion at this stage was nonsense,” a fourth diplomat said. Reaching an agreement first on a path for the MFF ahead of a discussion on climate at the March leaders’ summit “would have made it easier to get everyone on board,” the diplomat said, adding: ” I still don’t really understand why instead this was the sequence they went for.”

But some leaders hailed Michel’s approach as a success, and even praised Poland for coming along as far as it did.

Merkel expressed sympathy with Poland’s heavy reliance on fossil fuels and the fact that it could face some of the toughest disruptions from new climate policies. 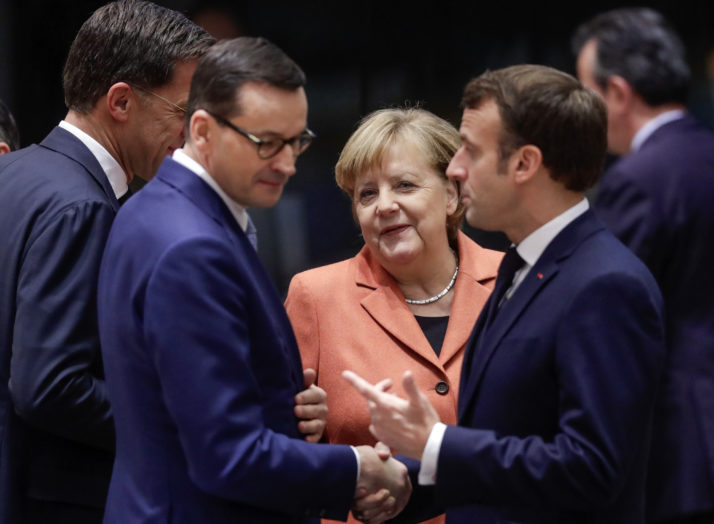 “Poland has … the most difficult starting position among all EU countries,” Merkel said, noting that 80 percent of Poland’s energy supply is currently generated by coal, while the next most carbon-dependent country, Germany, relied on coal for just 35 percent.

“If you need to radically change this within 30 years then you have to do a lot more,” Merkel said. “Thus I find it laudable that Poland says it wants climate neutrality even though it says ‘we can’t commit to the implementation at this moment, we have to talk with our people and our unions,’” Merkel said.

Regarding Morawiecki, she said he “has my understanding if he says he needs a bit more time.”

But Morawiecki and Poland may end up wanting a lot more time than Merkel, Michel or anyone expect. During the debate, Poland proposed meeting the new target by 2070, and the conclusions suggest it may never have to meet the goals at all.

“Poland,” Morawiecki told reporters, “will be achieving climate neutrality at its own pace.”

COVID-19 vaccine: Fraudsters seek to cash in on...

‘A coming together of factions’: Why the storming...

European reporters more and more obstructed in their...