Borrell also said that he was working to preserve the Iran nuclear deal, at the direction of the U.K., France and Germany — the European guarantors of the accord — but was not responsible for efforts to expand the scope of the agreement. Critics of the deal, including U.S. President Donald Trump, have said it should address other issues, including Iran’s ballistic missile program.

“Some voices have been asking for enlarging the scope of the deal and introducing new aspects,” Borrell said at a brief news conference following his meetings in Tehran — his first visit to the Iranian capital since taking on the EU’s top foreign policy job.

Last month, Britain, France and Germany triggered a formal dispute-resolution provision built into the nuclear deal, in response to Iran saying that it would further reduce its compliance with the agreement. Iran’s statement came after an increase of tensions and hostilities with the U.S., including a drone strike ordered by Trump that killed a top Iranian general, Qassem Soleimani, in Baghdad. Iran retaliated by firing missiles at military bases in Iraq used by U.S. soldiers and, on the same day, Iranian forces inadvertently shot down a civilian jetliner, killing everyone on board.

Tensions between Iran and the U.S. have been heightened since Trump’s unilateral pull-out from the nuclear deal.

Tensions between Iran and the U.S. have been heightened since Trump’s unilateral pull-out from the nuclear deal, known as the Joint Comprehensive Plan of Action (JCPOA), in May 2018.

After meeting Borrell on Monday, Rouhani criticized the West’s failure to uphold its side of the agreement, but said Iran was willing to return to compliance if the U.S. ends economic sanctions.

“The Islamic Republic of Iran is still ready for interaction and cooperation with the EU to settle issues, and whenever the opposite side completely upholds its commitments, Iran will also return to its commitments,” Rouhani said, according to Iranian news agencies.

Rouhani also said Iran would continue to allow monitoring of its nuclear program by the International Atomic Energy Agency, a step viewed by the Europeans as crucial to preserving the agreement through the dispute-resolution process.

“The Islamic Republic of Iran remains committed to the IAEA’s monitoring, the process of which has been continuing to date and it will continue unless we face new conditions,” Rouhani said.

Before visiting Iran, Borrell went to Amman, Jordan, as part of a wider effort to address tumult in the region, including Trump’s presentation of a new Middle East peace plan that has been widely rejected, including by the EU.

“The year started … in a very big turmoil, with tragic events, with confrontations, with decisions about the JCPOA, with the presentation of a new peace plan for the Middle East,” Borrell said at his press conference in Tehran. “Altogether, this has created a situation in which we Europeans, the European Union, has started contacts with all actors in order to see what we can do.”

Borrell said he would visit Washington on Friday as part of his efforts to promote stability.

“So we are trying to keep in touch with everybody, in order to try to see what we can do, once again to stabilize the region and to create the mutual understanding or at least to build, to build trust, which is certainly lacking,” he said.

He said there was agreement among the sponsors of the JCPOA to extend indefinitely a 15-day deadline set out in the dispute resolution process to give more time for negotiation. He said Britain, France and Germany wanted to avoid sending the matter to the U.N. Security Council, which would effectively kill the deal because Trump could veto any resolution aimed at salvaging it.

“This was not a measure oriented to finish with the deal, but to try to keep it alive, to give time for negotiation,” Borrell said of the triggering of the mediation process. “All of them agreed on enlarging and continuously postponing the dates and the time limits.” 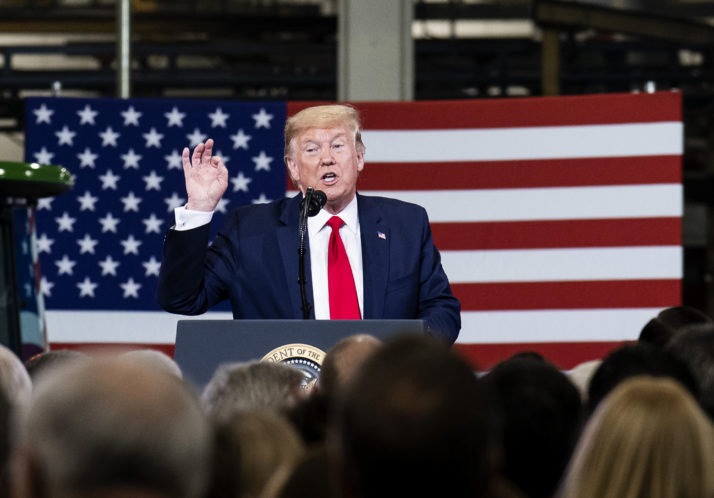 “The EU recalls its commitment to a negotiated two-State solution, based on 1967 lines, with equivalent land swaps, as may be agreed between the parties, with the State of Israel and an independent, democratic, contiguous, sovereign and viable State of Palestine, living side by side in peace, security and mutual recognition,” Borrell said.

“The U.S. initiative … departs from these internationally agreed parameters,” he added. “To build a just and lasting peace, the unresolved final status issues must be decided through direct negotiations between both parties. This includes notably the issues related to borders, the status of Jerusalem, security and the refugee question. The European Union calls on both sides to re-engage and to refrain from any unilateral actions contrary to international law that could exacerbate tensions.”

Trump attempts a pivot from ‘American carnage’ to ‘American comeback’

Macron seeks to reassure Poland on Russia, but sticks to his Moscow policy

Europe accounted for almost half of the world’s...

France rules limit in places of worship too...

‘Glampervans’: The surprising UK winner of the COVID-19...

Trump: I was asking Zelenskiy to help America,...