PARIS — Even as the dark days of scandal return to haunt them, France’s conservatives are dreaming of a comeback.

Just days ahead of local elections across the country, the trial of François Fillon, the former presidential candidate of the center-right Les Républicains (LR), is reaching its climax. Fillon is contesting accusations that he gave his wife a fake job as a parliamentary assistant and paid her some €1 million in public money.

The scandal torpedoed Fillon’s 2017 campaign, clearing the way for Emmanuel Macron to enter the Elysée Palace. LR, the political home of former Presidents Jacques Chirac and Nicolas Sarkozy, was beaten again in a parliamentary poll that same year and plunged to just 8.5 percent of the vote in the 2019 European Parliament election — down from 20.8 percent in 2014.

“It’s this simple: After going through the presidential, legislative and European drama, if we don’t have a win here, we’ll drown,” LR Assistant Secretary-General Alexandra Borchio-Fontimp said.

Yet the party is approaching the local elections, which take place over two rounds on the next two Sundays, with a sense of cautious optimism.

Across France, the party is betting that a clearer ideology and a strategy of targeting working-class voters will help it rise from the ashes.

Rachida Dati, the LR candidate for the biggest prize in the elections, the Paris mayoralty, is putting in a surprisingly strong showing. Polls show the former justice minister is neck-and-neck with Socialist incumbent Anne Hidalgo.

Across France, the party is betting that a clearer ideology — a brand of economic liberalism coupled with a hard stance on security and religious issues — and a strategy of targeting working-class voters will help it rise from the ashes.

It is also drawing on a still-dense network of local elected officials and party members — something that could give it an edge in light of Macron’s failure to build his centrist movement into a fully functional party with strong local roots.

There are early signs its efforts may be paying off. Aside from Paris, where a win for Dati is still a long shot in a two-round election, LR candidates are in leading positions in large cities such as Toulouse, Bordeaux and Nice.

Former French Prime minister François Fillon (center) and his wife Penelope Fillon (left) arrive at the Paris’ courthouse on March 10, 2020 for the requisitions part of their trial accusing them of embezzlement | Thomas Samson/AFP via Getty Images

The party has also seen a rise in registered members for the first time in years: It currently has 80,000 in its ranks, up from 58,000 in January 2019, according to Guillaume Peltier, LR’s vice president.

“For the first time in eight years … we are witnessing glimmers of hope,” Peltier,who has been tasked to help the party reconstruct itself, said in an interview. “It’s still modest but the party is picking itself up again.”

Although Les Républicains are keen to distinguish themselves from Macron, they have borrowed from his playbook. Just as the president set up forums across the country as a response to the Yellow Jackets protest movement, the conservatives have set off on a giant brainstorming exercise.

Peltier and Christian Jacob, the head of the party, have set up 12 forums organized by theme for 2020, with the goal of bringing together elected representatives and experts to try to rebuild the party’s ideological backbone.

“For the first time in years, there is an ideological coherence at the head of the party,” he said.

“Since 2017, the French conservative party has been struggling to display what it represents and [its] values in terms of policy position” — Bruno Cautrès, professor at Sciences Po

One LR member, speaking on condition of anonymity, suggested the party’s European election debacle had been a blessing in disguise as it convinced “the last enthusiasts of Fillonism” to ditch the former candidate’s focus on social issues that played well with his staunchly Catholic base.

Party leaders hope the new approach will prove an antidote to an existential danger highlighted by last year’s European election: the risk of disappearing in a two-horse race between Macron’s LREM and far-right leader Marine Le Pen’s National Rally.

“Since 2017, the French conservative party has been struggling to display what it represents and [its] values in terms of policy position,” said Bruno Cautrès, a professor at Sciences Po, the elite political science university in Paris.

Peltier, who started his career on the far right with the National Front, sees Charles De Gaulle, Chirac and Sarkozy as part of Les Républicains’ intellectual lineage. But he has also found a new source of inspiration: U.K. Prime Minister Boris Johnson.

“His first speech last July was to turn back on austerity and be the party of social justice,” said Peltier. Items on Johnson’s agenda such as an “ambitious policy” for local communities and strong security measures are already part of LR’s program, he added.

Still, Peltier’s party is struggling to define its line on economic and fiscal issues, after Macron stole its thunder on flagship reforms long demanded by conservatives, including the suppression of a wealth tax and a reform of labor laws. 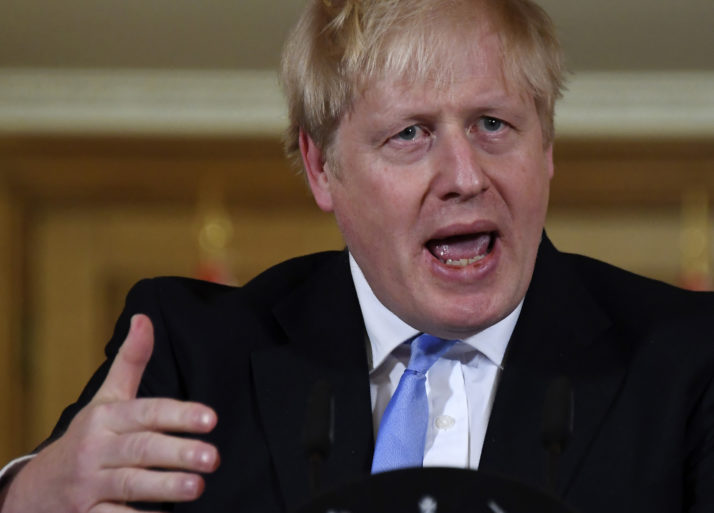 Peltier said he also wants to see an increase in salaries for teachers and “additional financial means for social professionals,” two traditionally left-leaning groups, along with an increase in the number of police officers.

Teachers are among the most affected by Macron’s flagship pension reform, which ignited the anger of French unions and paralyzed the country for weeks in massive strikes throughout the fall and winter.

Les Républicains have also lifted some tactics from the far right. Slamming Macron’s “globalism,” Peltier said he wanted to reach out to “farmers, craftsmen, [blue-collar] workers … or small entrepreneurs who tell us it’s never their turn.”

With an eye on the next presidential election in 2022, the party sees an opening among traditional right-wing conservative voters who appreciate Macron’s fiscal policies but are turned off by his liberal social measures.

Macron’s base these days is made up of older, wealthier voters, as a large portion of his younger supporters migrated to the Greens or other left-leaning parties.

“The match point for 2022 is whether right-wing voters feel Macron has given them enough and is part of their family,” said Cautrès, the Sciences Po professor. “But I really have doubts that traditional conservatives feel aligned to his societal policy,” he added, referring to the opening up of assisted reproductive technologies for single and gay women as one example.

For Les Républicains, looking to the future also means grooming a new generation of leaders. “Today, we see a young guard and young deputies in key positions such as vice president of the party and general secretaries,” said Marine Brenier, a 33-year-old first-term Les Républicains MP who is herself a member of the new generation.

But Robin Reda, an MP who left Les Républicains last year, cast doubt on whether the new faces would really be allowed to lead. He noted the party had always valued figures who had worked their way up the ladder.

“Let’s not forget that the presidential [hopefuls] are still from the so-called old world,” he said.

One member of the old guard has already predicted a bleak future. At the start of his trial last month, former presidential candidate Fillon said the damage to the movement he represented was “irreparable.”

His former party can only hope he was wrong.

How TV prepared us for the impeachment hearings

Far-right extremist suspected of being behind Hanau attack

Trump is an authoritarian weakman

Sebastian Kurz to return as Austrian chancellor after...

Maltese PM Joseph Muscat to step down next...

A little taste of Egypt in a Russian...