Was it blackmail or extortion, or just a misunderstanding that led Turkey to send thousands of asylum seekers to the Greek border last week? Perhaps it was simply a difference in perspective.

Council President Charles Michel and Commission President Ursula von der Leyen met with Turkish President Recep Tayyip Erdoğan for two hours on Monday evening in what they described as a crucial step in clearing up any such differences.

And even more importantly, officials said, the two sides are now back on speaking terms.

“It was important on this occasion to exchange our views on different topics related to the relationship between Turkey and the European Union,” Michel said, adding: “We had the occasion to share our different opinions.”

What wasn’t entirely clear after their meeting in Brussels was how much more money — if any — the EU was prepared to pay on top of the roughly €6 billion allocated under the 2016 migration agreement to help Erdoğan’s government manage the nearly 4 million Syrians now living in Turkey. About €3 billion have been disbursed so far.

“I want to stress that it is good that the lines of communication with Turkey remain open and active” — Ursula von der Leyen, European Commission president

Or if Brussels would, in fact, take any steps toward easing visa requirements, and accelerating the completion of a customs union — as Ankara expected under the 2016 deal in which Turkey agreed to control the flow of migrants and asylum seekers to Europe.

That deal was hanging by a thread even before 33 Turkish soldiers were killed in an air raid in Idlib, Syria late last month, prompting Erdoğan to make good on his longstanding threat to reopen the gates, by allowing thousands of people to mass on the Greek border last week on the promise that they would be permitted to cross.

Erdoğan’s move stoked fear of a repeat of the EU’s 2015 migration crisis, and it sent Michel and von der Leyen racing to the Greek-Turkish border, along with Parliament President David Sassoli, where they appeared alongside Greek Prime Minister Kyriakos Mitsotakis to make clear that the gates were, in fact, closed.

The day after that show of solidarity Michel paid a visit to Ankara but it did not immediately ease tensions on the border, which were only heightened by reports of the Greek authorities firing plastic bullets and using other force to repel the refugees.

Over the weekend, in a gesture of good will, Erdoğan ordered his coast guard to resume intercepting migrant boats in the Aegean Sea, and both sides seemed eager to dial down the hostilities as the Turkish leader arrived in Brussels on Monday. He stopped first at NATO headquarters for a meeting with Secretary-General Jens Stoltenberg, then headed to the European Quarter to confer with Michel and von der Leyen.

The Commission president said: “I want to stress that it is good that the lines of communication with Turkey remain open and active.” On that point, everyone appeared to agree.

“Migrants need support,” von der Leyen said at a news conference with Michel, after Erdoğan had already left for the airport. “Greece needs support. But also Turkey needs support and this involves finding a path forward with Turkey. Clearly, we do have our disagreements but we have spoken plainly and we have spoken openly to each other about these and it was good conversation. It was a good dialogue and it was a constructive one.”

While Michel and von der Leyen apparently expressed the EU’s unhappiness about the pressure created along the Greek border, EU diplomats said that there were tight limits on what the bloc’s leaders could offer Erdoğan.

“I expect them to discuss money, and I’m afraid of that discussion,” one diplomat said, saying there was no consensus among national capitals on additional funds.

Without authorization of more money, the EU’s remaining flexibility lies in the remaining amount allocated under the 2016 deal that has not yet been disbursed.

Michel said he tried to explain some of this flexibility. 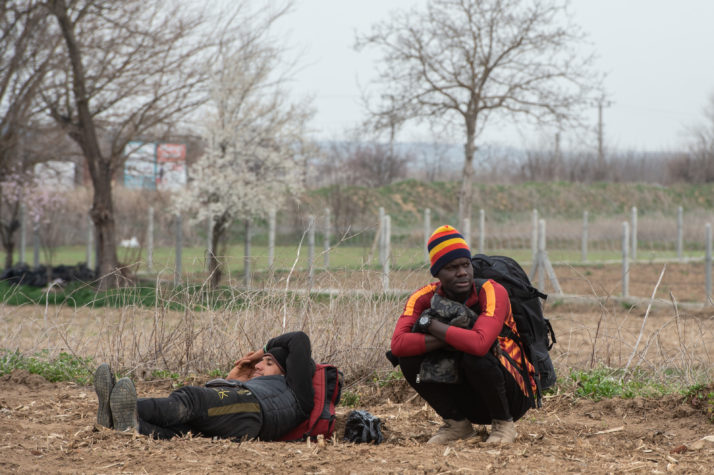 Officials said that some of the leaders’ discussion on Monday focused on Turkey’s frustrations over aspects of the 2016 deal that had not been fulfilled to Ankara’s expectations, including money that ended up paid to non-governmental organizations. Turkey is also unhappy about the slow pace on easing visa restrictions and accelerating the customs union — plans that have stalled in large part because of a broader souring of relations between Turkey and the EU that followed Erdoğan’s heavy-handed response to a coup attempt in July 2016.

Michel and von der Leyen said that they had agreed with Erdoğan to task the EU’s foreign policy chief, Josep Borrell, and the Turkish foreign minister, Mevlüt Çavuşoğlu, with going through the 2016 EU-Turkey statement, as the deal is known, and identifying any and all differences so they can be resolved.

“I think it’s always important that we do not fight about numbers and facts,” von der Leyen said. “We have to have the same approach towards that. Of course the interpretation of it can be different or the solutions you draw from facts and numbers can be different.

“So it was an important step forward and that was the demand too on the Turkish side, to have a very close look with experts at the EU-Turkey statement to find common ground where things are missing and where we have been successful, and indeed we are going through the whole statement. So every topic will be a matter of discussion.”

What happens once those differences are clear remains to be seen. But in one sign of potential movement, EU leaders are expected to discuss Turkey at their regular summit in Brussels later this month, according to an internal diplomatic note seen by POLITICO.

“The deal needs maintenance, also on our end,” a second EU diplomat said. “But seeing how far relations have soured … and the limited political space … I think the creativity required to make the deal weatherproof might be left wanting for some time.”

This diplomat said easing visa restrictions was virtually impossible, and that there was no appetite for speeding up completion of the customs union, particularly given other sharp differences between the EU and Turkey, including on oil drilling in the eastern Mediterranean.

A third diplomat said one way or another, it was vital for Brussels and Ankara to reach an accommodation.

“I think we should focus on how to make the current deal work again,” this diplomat said. “More money will come eventually. We need an urgent solution for the thousands of people already at the border. We can’t promise visa liberalization unless the respective benchmarks are met but if they continue with the illegal drilling activities it’d be difficult to have all member sates on board for something major.”

Beyond blackmail at the Greek-Turkish border

Colombians protest with music and dance in Bogota

Mediterranean countries give green light to deal on...