EU leaders took their first, tentative steps toward a deal on a new seven-year budget, but remained far short of an agreement Thursday night, and planned to resume talks Friday morning, diplomats and officials said.

During a first round of discussions at an extraordinary leaders’ summit, German Chancellor Angela Merkel insisted that Germany and other wealthy countries retain the so-called rebates that help offset their large budget contributions. Merkel rejected a proposal by European Council President Charles Michel to reduce the rebates over time.

The Netherlands, Sweden and Denmark are among others who also want to preserve the discounts, which are meant to compensate countries who pay much larger amounts of money into the budget than they receive from it.

But perhaps Merkel’s boldest negotiating tactic on Thursday night was simply declaring herself tired and heading back to her hotel shortly after 10 p.m. — a clear, if understated, message that she felt no great urgency over the discussions. Her plan to get a full night’s sleep also reflected confidence that as the largest contributor to the budget, Germany’s preferences would be reflected in the final deal.

While Michel continued his consultations through the night, other leaders followed Merkel’s example.

After his own, nearly hour-long one-on-one meeting with Michel, French President Emmanuel Macron headed out to dinner around 11 p.m. Officials said they expected Michel and his team to re-crunch the numbers overnight and issue a new proposal before the leaders reconvene at 10 a.m. Friday.

“There will be further conversations throughout the night in various formats. Things will continue tomorrow morning in the group of all 27 EU countries,” Austrian Chancellor Sebastian Kurz told reporters as he left the European Council before 1 a.m.

Dutch Prime Minister Mark Rutte, who left for his own hotel around the same time, said that he was hesitant to assess the chances of reaching an accord on Friday. “Small miracles are possible,” he said.

The leaders are debating a financial blueprint for 2021 to 2027, while confronting a dual challenge: how to provide the resources for an array of new policy priorities, especially the fight against climate change, while also filling a roughly €75 billion hole left by the U.K.’s departure from the EU.

The basis for their negotiations is a plan put forward by Michel amounting to €1.095 trillion in spending commitments over the seven years — amounting to 1.074 percent of the bloc’s gross national income (GNI). The European Commission had put forward a larger proposal, totaling €1.135 trillion, or 1.11 percent of GNI, while the so-called frugal net-payer countries are pushing to hold the line at a traditional benchmark of 1 percent of GNI.

To come into effect, a budget deal must be approved by the European Parliament, which has called for even larger spending — €229 billion more than Michel has proposed. On Thursday, Parliament President David Sassoli even threatened a veto if the heads of state and government do not open the spigots and let the money flow. (Few take the veto threat seriously given that any delay by Parliament would risk paralyzing EU programs, causing layoffs of workers and disrupting services for citizens.)

Michel has said he is aiming to clinch a deal at this week’s summit — a mightily ambitious goal considering that EU budget agreements typically require at least two, and sometimes more, dedicated gatherings of the heads of state and government.

The slow progress Thursday night suggested Michel might well need to readjust his expectations. While some officials had predicted through-the-night negotiations, it was quickly clear that a deal was not close enough for such intense bargaining. Instead, Michel and his team of advisers were preparing a new proposal based on the positions voiced by leaders.

While EU officials had said they were intent on not letting other issues interrupt the focus on the budget, the unfolding humanitarian catastrophe in Syria prompted a change of plan. Macron and Merkel telephoned Russian President Vladimir Putin to express their dismay over the bombings and fighting in Idlib that reportedly displaced some 900,000 people. And the Council issued a statement citing “enormous human suffering” in Syria and branding it “unacceptable.”

On the budget, some EU leaders seemed relatively content with the way things were going. Luxembourg Prime Minister Xavier Bettel, whose country enjoys the highest per capita GDP in the EU, was among the first to leave the Council building on Thursday evening. 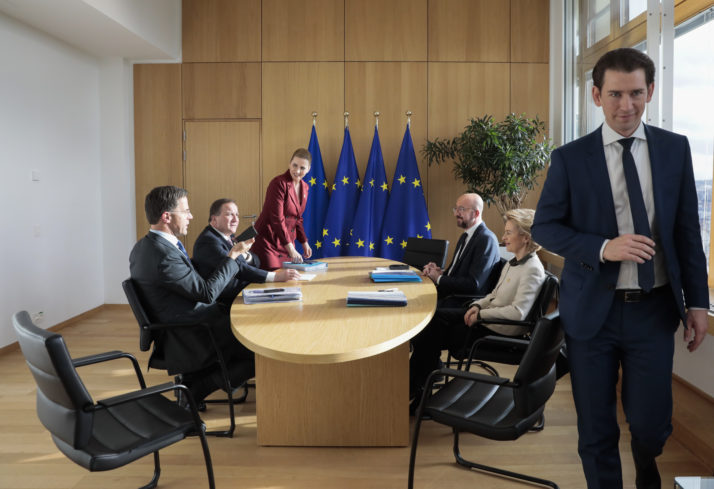 In a sign of the sway the net-payer countries have over the final budget result, Commission President Ursula von der Leyen joined Michel for his meeting with the “frugal” quartet of the Austria, Denmark, the Netherlands and Sweden.

During a roundtable discussion with all of the leaders, von der Leyen said she appreciated that the budget proposal put emphasis on the Commission’s flagship policy proposals, including the European Green Deal and an ambitious digital initiative, according to an official familiar with the talks. But before the summit got underway, von der Leyen told POLITICO’s EU Confidential podcast that she expected “tough negotiations.”

“We will have to defend the modernization of the budget,” she said.

Merkel, in her remarks, called for a rebate system to be enshrined for the full seven-year budget period, while Rutte insisted there was no justification for an increase in the overall size of the budget, considering the departure of the U.K.

Portuguese Prime Minister António Costa, who has sought to coordinate the efforts of countries that benefit most from regional development funds, urged his colleagues to invest in Europe’s future, telling them that Brussels needs a budget sufficient to deliver on its commitments and promises.

Watch: Protesters take to the streets of Portland...

Thousands of protesters take to streets of Bangkok...

EU Parliament will vote on new Commission (minus...

‘A coming together of factions’: Why the storming...