Orbán’s next move: Overpowering the courts

Zeljko Jovanovic is director of the Roma Initiatives Office at the Open Society Foundations.

Viktor Orbán is taking his campaign for total control of Hungary to a new level.

The Hungarian prime minister announced last month that his government would block a court decision awarding compensation to Roma victims of school segregation in the town of Gyöngyöspata.

Hungarians, Orbán argued, “will never accept giving money for nothing.” The real victims, he has claimed, were the town’s non-Roma schoolchildren.

The implications of Orbán’s announcement goes far beyond the fate of the Roma, in Gyöngyöspata or the rest of Hungary.

Fidesz, wounded by the opposition’s victories in Budapest and other important places in recent elections, is now worried it could lose its hold on power.

Until now, Orbán and his ruling Fidesz party have been content to whip up opposition to manufactured external enemies — the European Union, George Soros, migrants — in order to tighten their grip on the levers of power. Now, they are manufacturing enemies from among the country’s own citizens — and stirring anti-Roma racism is perhaps the easiest method they could choose.

This shameful episode will be instructive in how far the regime will go to maintain its grip on Hungary. Orbán is saying, effectively, that whenever victims of illegal or criminal acts win in court, the government will determine whether the decision is right, if there should be compensation and how it should be delivered.

Once the regime creates a precedent for overpowering the courts, anyone who is not in good favor with those in power has no rights; those in good favor, even if they are criminals, will be protected.

Orbán has also announced plans to hold a “national consultation” on how the court’s compensation ruling — a tactic he’s employed before, when he mailed wildly misleading questionnaires about George Soros’ views on migration in an effort to discredit him.

A member of the Roma community participates in a demonstration in Budapest on May 21, 2019 | Attila Kisbenedek/AFP via Getty Images

In response to the move, Roma civic leaders mounted a peaceful protest, taking to the streets of Budapest calling on the government to respect Roma rights.

The regime’s moves are born of fear. Fidesz, wounded by the opposition’s victories in Budapest and other important places in recent elections, is now worried it could lose its hold on power.

After a decade under Orbán, Hungarian citizens are starting to ask questions the government would prefer not to answer: Why have a historically high number of Hungarians left the country? Why do Hungarians deserve rapidly worsening public health services? Why do Hungarian children deserve an education system that, in the last decade, has plummeted from 37th to 96th position out of 138 countries ranked by the World Economic Forum?

And so the regime is now taking a page from the playbook of Jobbik, the far-right Hungarian party that sought to build power by attacking the Roma.

Jobbik wrote that playbook roughly a decade ago, exploiting the anger and anxiety spawned by the financial crisis and scapegoating the Roma by tapping into entrenched stereotypes.

Those efforts sparked hatred against the Roma and led to uniformed paramilitaries marching through Roma communities. The far-right motivated killings of six Roma, including Robert Csorba, a young child, were tragic, yet caused no change in attitudes toward the Roma.

Hate has no place in the European way of life.

Orbán’s methods are all the more chilling given the far-right menace rising all around him. “Racism is a poison,” German Chancellor Angela Merkel rightly said after the latest far-right terrorist attack in her country, which killed 10 people in Hanau — several of whom were reportedly Roma.

And yet when it comes to Hungary, Merkel’s actions belie her words. The chancellor is the most powerful figure in Germany, her Christian Democratic Union and the center-right European People’s Party — all of which still work with Orbán and allow the EU to continue to finance a regime that plays with the same “poison” that led to the tragedy in Hanau.

This gives members of the German political and industrial elite incentives to work with and in Hungary — effectively enabling Orbán’s authoritarian campaign of hate.

Much can be done to change this while we still have the means. The first thing to do is to replace political hypocrisy with moral clarity. Both Viktor Orbán and far-right terrorists claim to be protecting a way of life — as does the new European Commission, which includes, for the first time, a commissioner for “promoting our European way of life.”

Political leaders must also respond to far-right terrorism with the same vigor and resolve they use in response to terrorist acts committed in the name of Islam. 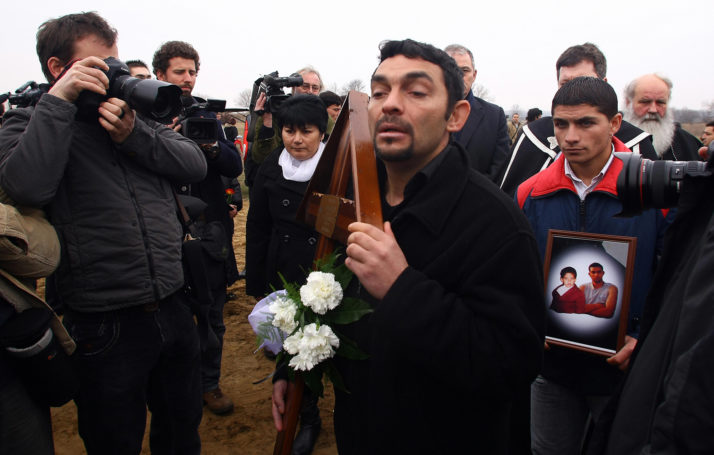 Relatives and media attend the funeral service of Robert Csorba and his young son, also named Robert, who were murdered in February 2009 | Peter Takacs/AFP via Getty Images

It’s not enough, as the Council of the European Union has proposed, to “create a better situational overview” and “develop and share good practices.” Far-right terrorism has tripled in the last five years. EU policy debates must factor in the racist politics that are fueling terror.

Furthermore, the European People’s Party must cast Fidesz out of the family. Keeping the party within the fold of the largest pro-EU political force has not improved the state of Hungarian democracy.

The EU should also stop providing the funds that power Fidesz’s corrupt and racist machinery. Unless actions like these are taken, words will have no meaning when the next killings happen.

Fidesz has been breaking every social and institutional check on its power, and we all know where that leads. I grew up under Slobodan Milošević’s regime in Serbia, where the catastrophic consequences of that dictatorship will last for generations.

The window of opportunity may be closing for Hungary, but this is no time for defeatism. If the Roma could lead thousands of people to last Sunday’s protest, those with much more power can use it to help Hungary become a true democracy again.

Trianon trauma: Why is the peace treaty signed...

A roadmap for exiting the crisis

Will the Lega and 5 Star alliance survive...

Joe Biden says he’d lock down US if...