DAVOS, Switzerland — Two years ago U.S. President Donald Trump flew here and took the gathering of elites at the World Economic Forum by storm. Every conversation seemed to revolve around the American leader and his signature brand of political disruption.

Trump came back this year, and was greeted with a shrug.

Make no mistake, all the standard elements of the Trump tornado were on display. There was his keynote address boasting about how well the U.S. economy is doing on his watch. There was a blizzard of meetings with foreign leaders and U.S. finance and tech CEOs, at which he reportedly said he wished he owned stock in their firms because of how much money he had made them. There was the honking news conference with its usual lamentations about impeachment and the “major sleaze bags” trying to drive him from office.

The big difference was the way most people at Davos, including Americans but especially the non-Americans, were responding to this flamboyant but familiar show. The consensus reaction: whatever.

This year’s Davos gathering featured several preoccupations — subjects that seem to come up at every panel, in every sidewalk encounter — and it is striking that Trump is a marginal figure in all of them.

The general mood here made the self-oriented, rah-rah promotion of Trump seem off-key, irrelevant to the moment.

“Some of the American delegates behave as if the world is America,” with its 24-hour, 7X-weekly Trump obsession, while much of the rest of the world has simply moved beyond the Trump drama,” David Miliband, a former British foreign minister who now heads the International Rescue Committee, said in an interview.

Christian Rhally, an executive at LinkedIn who emphasized he was speaking in a personal capacity, said Trump lacks “the aura or the respect” that a president might ordinarily command at Davos. Echoing a common refrain, he said Trump’s Tuesday address sounded more like a “campaign speech,” raising the question of whether he was even trying to engage with the global audience. “You can’t ignore him but it’s nothing people really talk about.”

Conversation was instead dominated by three seething conflicts that many participants see as existential in their long-term implications for the global order:

— There is the conflict over the future of capitalism. Business and government leaders here look at polling in nations around the world, and see the tenor of the debate in the Democratic presidential campaign, and acknowledge that deep mistrust of free markets is likely to be an enduring political reality.

— There is the conflict over the future of technology. This is partly about how vigorously to regulate U.S.-based giants like Facebook and Amazon. Even more, however, tech policy is being viewed through the prism of long-term competition between the United States and China over who will be more influential in shaping the global tech landscape on artificial intelligence and 5G mobile capacity.

— Above all, there is the conflict over the future of the planet. In this case, the climate change debate came with an edge of generational tension. Seventeen-year-old celebrity activist Greta Thunberg commanded the spotlight here, who scolded reckless capitalists and feckless policymakers in her speech: “Your inaction is fueling the flames by the hour, and we are telling you to act as if you loved your children above all else.”

It seems likely that Thunberg’s perspective goes back far enough to realize that her very presence — and the celebratory attention lavished upon her — was an illustration of one of the historic roles of the Davos gathering.

With its mix of public-policy activists side by side with some of the planet’s wealthiest and most influential people — all participating in a virtually round-the-clock blur of panels and parties — Davos has long served as a kind of buffering agent between go-go capitalists and do-good social activists.

For the capitalists, the theme of censorious self-criticism was especially pronounced this year. Jamie Dimon, the CEO of JPMorgan Chase, wrote in a special Davos issue of Time magazine that “capitalism may be at a tipping point,” endangered in part because policymakers and business leaders “have done of a poor job of helping those who have been left behind.”

An annual survey known as the “Trust barometer” sponsored by the Edelman public affairs firm — collecting views from 34,000 people in 28 countries — captured the downbeat assumptions that pervaded many conversations at Davos. Some 56 percent of respondents say they believe that capitalism does more harm than good. Fewer than 1 in 3 people in developed markets believe they and their families will be better off in five years’ time. Nearly 80 percent agree that “elites are getting richer while regular people struggle to pay their bills.”

“Greta is great,” said an executive for a Japanese manufacturer. “Even if she can’t deliver, she is needed to balance Trump in conversation and that seems to be happening.”

Virtually every event or corporate-branding project here was designed to associate the sponsor with the message of acknowledging gaps in equality — between sexes, between geographical regions, between capitalism’s winners and losers — and pledging to do something about it. “Let’s make business the greatest platform for change,” read the banner at the Salesforce hub here.

The blasé reaction to Trump showed how quickly the Davos crowd has gone through its stages of reaction to a figure who was elected in part with a pledge to halt the kind of economic and social integration that historically has been celebrated by the World Economic Forum.

Three years ago, just as Trump was about to be inaugurated, the general thrust of conversations with business and government leaders about him was one of alarm: “What the hell has happened to America and what does this mean?!”

Around the time of his first appearance at Davos two years ago, fresh off passing a tax-reform measure that many business leaders liked as pro-growth, people here criticized his divisive style but often added something like, “You know, his actual record is not as bad as we feared and we can learn to live with him.” 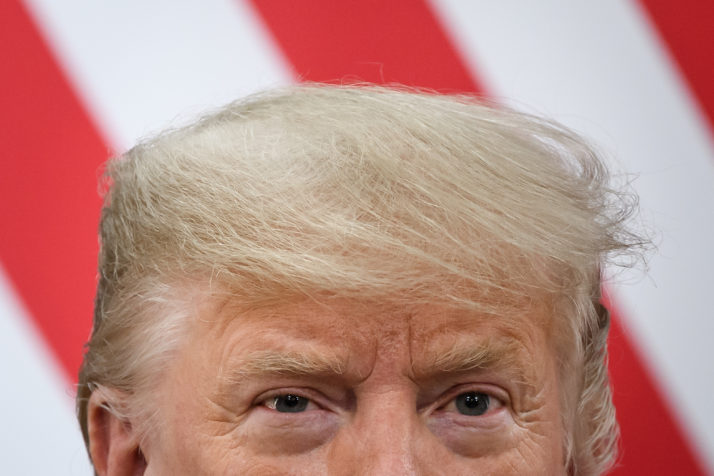 Now, Trump’s style and substance seems to have been factored into people’s expectations already — creating a new normal — that Trump has become something people don’t often associate with him: no longer especially interesting.

It is not that the Davos participants see themselves as simply waiting out Trump. There was lots of chatter here predicting that he would win reelection, though the reasons offered were not any more insightful than something you would hear on a random cable-TV panel (Trump’s base is so loyal; Democrats may nominate someone too divisive, etc.).

Still, the general mood here made the self-oriented, rah-rah promotion of Trump seem off-key, irrelevant to the moment.

At his Wednesday news conference before leaving, Trump said he wished he saw Thunberg’s speech but that she should turn her attention elsewhere from the United States because “our water numbers, our numbers on air, are tremendous.”

“He is a moron,” a European energy executive said of Trump. “Do we have time for it? No. We have to change our whole company to get carbon-neutral.”

“Greta is great,” said an executive for a Japanese manufacturer. “Even if she can’t deliver, she is needed to balance Trump in conversation and that seems to be happening.”

The man at the center of Brussels spy probe

Mosquitoes to be bred on large scale to...

Greece to go back into lockdown for one...