UK goes on a spending spree

LONDON — If it wasn’t for the coronavirus, we’d be calling it the Dominic Cummings budget.

The U.K.’s post-Brexit economic roadmap — laid out by the country’s fresh-faced Chancellor Rishi Sunak on Wednesday — was the fiscal realization of Boris Johnson and his chief adviser’s reinvention of the ruling Conservative Party.

It rammed the final nail in the coffin of 10 years of Tory austerity economics, opened the coffers on billions of pounds in spending on infrastructure and (some) public services, and placed a heavy emphasis on science and technological innovation. In other words, it was the Cummings formula that  — combined with the promise to “get Brexit done” — proved so popular with British voters in last year’s general election.

Nevertheless, the headline figure wasn’t part of the plan until a matter of weeks ago: a £12 billion package to help the U.K. economy endure the worst of the coronavirus outbreak.

Nevertheless, the independent fiscal watchdog the Office for Budget Responsibility conceded that its economic forecasts, which underpin the budget and were drawn up before the outbreak escalated, had to some extent been “overtaken by coronavirus” — an admission that no one can predict with confidence what the U.K. — or indeed the world — economy will look like in a few months’ time.

As part of the plan to shore up the U.K. economy against coronavirus, small businesses will receive billions in temporary tax breaks and sick pay guarantees to ensure they don’t go under; local councils will be given a share of a £500 million “hardship fund;” and the National Health Service will get £5 billion of emergency cash to, among other things, re-hire retired doctors and nurses.

A further £18 billion of “fiscal loosening” would also act as a wider stimulus to the economy, Sunak said — bringing the headline figure to £30 billion. It amounts to one of the most significant economic responses to coronavirus so far by a major economy, and came as the number of cases in the U.K. shot up to 456, with seven deaths in the country.

In such circumstances, the detail of the budget was always likely to be overshadowed, no matter how drastic a break with the past.

The U.K.’s budget includes measures to bolster the country’s economy during the coronavirus crisis | Tolga Akmen/AFP via Getty Images

Sunak duly tackled the issue first in his speech. “I know how worried people are,” he said. “Worried about their health, the health of their loved ones, their jobs, their income, their businesses, their financial security. And I know they get even more worried when they turn on their TVs and hear talk of markets collapsing and recessions coming. People want to know what’s happening, and what can be done to fix it.”

Hours before Sunak stood up to deliver the speech, junior health minister Nadine Dorries confirmed she had tested positive for the virus and was self-isolating. Despite having last week attended a reception at No. 10 Downing Street with Dorries, Johnson himself had not had close contact and was not being tested, officials confirmed.

But even without the coronavirus stimulus, it was still a significant budget — if not an entirely surprising one.

The OBR called it the biggest giveaway budget since 1992 (a big spending plan that was rapidly reversed after the then Conservative government left the European Exchange Rate Mechanism) and confirmed that it would take “real day-to-day spending per person back to pre-austerity levels.”

How to pay for it all? A sharp rise in government borrowing coupled with a “review” of the government’s fiscal rules to ensure that the purse strings can remain loosened, even if debt rises. Luckily for the government, borrowing remains cheap. The OBR said the approach looked “sustainable over the medium term on current interest rate and growth forecasts.” However, its forecasts could not include potential impacts of coronavirus, nor the government’s response.

“[It] marks a big shift in the Tories’ approach to spending and borrowing, a clear break with last 10 years,” said Tim Pitt, partner at business advisory firm Flint, and a former adviser to the two previous chancellors, Philip Hammond and Sajid Javid. “But it shouldn’t come as a surprise. This was all clearly signposted at the election. Coronavirus aside, there doesn’t seem to be lots of new spending over and above the manifesto.”

While Sunak praised the achievements of his Conservative predecessors, he delivered “a complete divorce from what we’ve seen up to 2019,” said Ian Mulheirn, executive director of former Prime Minister Tony Blair’s Institute for Global Change think tank.

The extent to which the new approach tears up traditional conservative economics was perhaps best captured by the response of the Adam Smith Institute, a stalwart of the Thatcherite thinking that once defined Johnson’s party.

“A Conservative government should not implement debunked Keynesian stimulus theories,” said the group’s head of research Matthew Lesh. “Some infrastructure and public services spending, as well as supporting individuals and businesses during Covid-19, is necessary. But in the longer-run, spending like a drunken sailor will not create a thriving entrepreneurial economy.”

Sunak’s budget also pledged “the fastest and the largest increase in [research and development] spend ever,” taking it to £22 billion a year, higher as a percentage of GDP than the U.S., China, France or Japan, he said.

The U.K. will have its own version of the U.S. novel technologies agency ARPA (now known as DARPA), costing £800 billion to develop “blue skies” technological ideas, Sunak said. It is all part of Cummings’ vision of post-Brexit U.K. as a global leader in science, education and technology. There are also plans for the government to create a “digital identity market that makes it possible for people to prove things about themselves without showing paper documents.” More prosaically, but in a similar vein, value added tax on digital publications — dubbed the reading tax — will be scrapped.

However, for a government that has tried to portray itself as a world leader in combating climate change ahead of hosting the crucial COP26 summit in Glasgow this autumn, there was relatively little serious progress toward the U.K.’s carbon-neutral by 2050 goal. Tax on gasoline fuel was frozen and £27 billion was pledged for new roads. 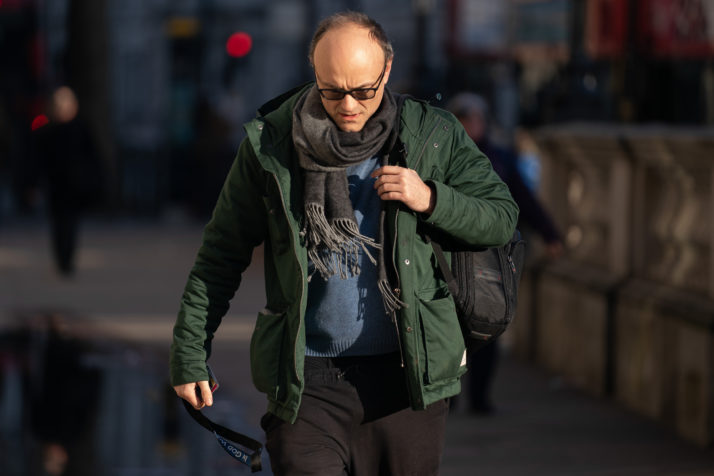 “Far from ‘getting it done’ for climate and nature, the chancellor has completely missed the opportunity to address the climate emergency,” said Greenpeace’s head of politics Rebecca Newsom. “The government must lead by example if it’s to have any leverage to encourage other countries to increase their ambition at the global climate summit this year.”

As for the economic downside of Brexit, it did not merit a mention in Sunak’s speech. The OBR said that it had so far reduced the potential size of the economy by 2 percent below what it otherwise would have been, and that the Canada-style trade deal the government seeks with the EU will hold productivity back by 4 percent.

Big decisions lie in wait for this government on the Brexit front — but between bracing for coronavirus and breaking with 10 years of Conservative economic thinking, team Johnson will be happy to keep those out of the headlines for a while.

Are you a professional following the impact of Brexit on your industry? Brexit Transition Pro, our premium service for professionals, helps you navigate the policy, and regulatory changes to come. Email [email protected] to request a trial.

Power to the Parliament

One dead and eleven injured in Minneapolis shooting

Coronavirus: Sweden’s ‘preppers’ say I told you so

Félicien Kabuga arrested near Paris for role in...