Why Sinn Féin is surging in the Irish election

The party, which advocates for greater public spending and the unification of Ireland, has surged in polls, emerging as the most popular party among all but the over-55s amid anger over a housing shortage and strained public services that threatens to deny Varadkar a second term.

POLITICO’s poll of polls shows liberal-conservative Fine Gael and Sinn Féin both polling at 21 percent, behind the centrist Fianna Fáil at 25 percent — with some individual polls putting Sinn Féin firmly in second place.

“Fianna Fáil and Fine Gael have been in power in this state for almost a century,” Sinn Féin leader Mary Lou McDonald said after the release of a poll on Sunday that showed yet another rise in support. “I believe it is time for change.”

The party is running only 42 candidates, so cannot come close to the 80 seats needed to form a majority. Coalition negotiations are set to be difficult: Sinn Féin is an unpopular choice for a partner, dogged by their past as the political voice of the Provisional Irish Republican Army. But, for the first time in the history of the republic, they have a serious shot at being part of the government in Dublin.

Fine Gael has emphatically ruled out a coalition with Sinn Féin, and Fianna Fáil is unenthusiastic.

“I have a moral issue in terms of how they continue to defend and endorse the atrocities of the past, the idea that the IRA campaign of 40 years was somehow just,” he said. “There was huge damage done to the prospects for Irish unity, communities were targeted, many innocent people were murdered, and yet Sinn Féin wants to create a new narrative around that that is dangerous and poisonous to a younger generation.

“Also, economically Sinn Féin are very anti-enterprise and have an anti-EU streak,” he added.

Foreign Minister and Deputy Prime Minister Simon Coveney told POLITICO that a clear result in the election looked “unlikely,” as he urged campaigners to knock on every door they could to turn around the campaign for Fine Gael in its final week.

For more polling data from across Europe visit POLITICO Poll of Polls.

If coalition negotiations are protracted, he said the current government would continue its role in Brexit negotiations ahead of high-stakes trade talks with Britain that could make or break the Irish economy.

“Certainly for the month of February, if the current government needs to remain in order to finalize a mandate, I’m sure there would be consultation with other party leaders to try to get that right,” he said.

The story of the once-fringe party’s electoral surge began with the global financial crisis that crushed the Irish economy in 2008. This created the conditions for Sinn Féin to move away from its image as a single-issue party on Irish unity.

During an international bailout program that required crippling tax hikes and spending cuts, Sinn Féin positioned itself as an anti-austerity party akin to European left-wing parties like Spain’s Podemos and Greece’s Syriza. It also became a visible presence in street protests against Ireland’s austerity measures.

“If the economy is doing well then why are ordinary people not feeling it?” — Mary Lou McDonald, Sinn Féin leader

Sinn Féin went on to cultivate a progressive image, campaigning prominently in favor of Ireland’s landmark referendums to legalize same-sex marriage in 2015 and abortion in 2018.

Its visibility on such issues broadened its appeal beyond an identity as a single-issue party for unification, helping it gain popularity among a younger generation that overwhelmingly backed the reforms.

On economic policy, Sinn Féin has successfully ridden anger against the current government for failing to curb a housing crisis that has caused sharp inter-generational inequality and record homelessness.

Fine Gael, which brands itself as fiscally responsible, is also being blamed for a lack of capacity in hospitals, transport and infrastructure to cope with a rising population and an economy growing at the fastest rate in the European Union.

In Ireland, there are currently record levels of homelessness | Peter Macdiarmid/Getty Images

Lumping Fine Gael and Fianna Fáil together as jointly responsible due to their governing arrangement together since 2016, Sinn Féin has promised greater spending and “the largest public housing program in the history of the state.”

“If the economy is doing well then why are ordinary people not feeling it? Who is benefiting? Well, not the people I’ve been speaking to,” McDonald said.

McDonald’s leadership represents a successful generational transition that is helping the party gain distance from the negative associations of the past.

In 2018, the Dubliner replaced Belfast-born Gerry Adams, who had led the party for 35 years. Unlike Adams, McDonald can appear on television without being challenged by journalists about accusations of membership of the IRA, the paramilitary organization that sought to end British rule in Northern Ireland through force. 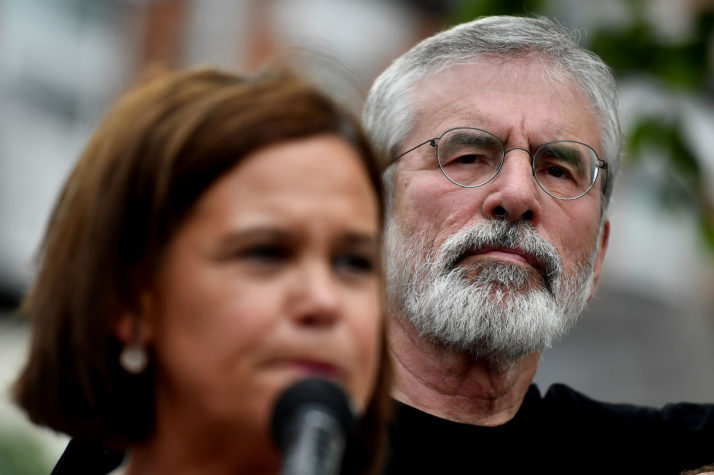 Sinn Féin’s ability to govern with bitter rivals, the Democratic Unionist Party, in Northern Ireland’s ruling assembly Stormont has made it difficult for its opponents to present the idea of it being in government in Dublin as unthinkable.

The party has also benefited from a crop of strong performers among its younger generation of lawmakers, including housing spokesman Eoin Ó Broin and Pearse Doherty, who won cross-political kudos for his forensic grilling of business chiefs in a parliamentary finance committee and is expected to top the poll in his constituency of Donegal.

Fine Gael hoped to be returned to government on a wave of support over Ireland’s economic growth and its widely-respected advocacy of Ireland’s interests in Brexit negotiations that prevented a trade border being drawn across the island.

But these issues appear to be completely crowded out by voters’ concerns around health and housing.

Asked whether the Brexit issue was coming up as he shook hands and spoke to voters in Cork, Varadkar told POLITICO: “Not a lot. It comes up occasionally … People always volunteer their current problems now rather than problems that are fixed or in the process of being fixed.”

And in an indirect way, Brexit has benefited Sinn Féin too. Its former suspicion of the EU receded as the all-island party began energetically campaigning against any border and for the protection of the rights of the Irish-identifying population of Northern Ireland, which overwhelmingly voted against Brexit. 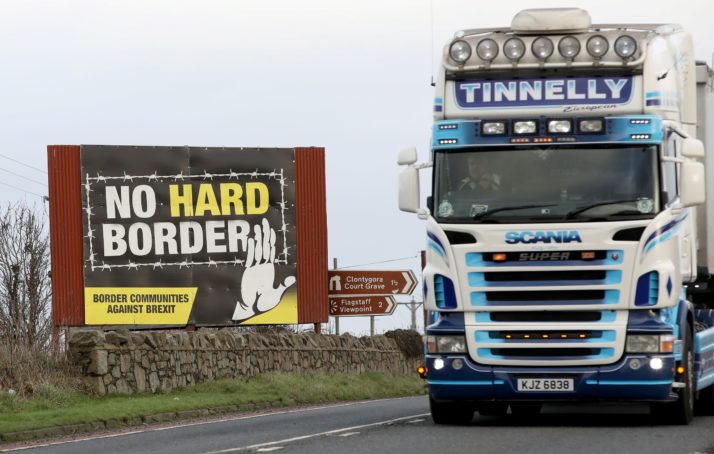 The U.K.’s Brexit referendum destabilized the compromise over the region’s constitutional status that had largely held since a 1998 peace agreement and brought discussions of unification to center stage. Support for an end to partition has surged in polls, and there is a widely-held expectation that a referendum on the issue is only a matter of time.

For a younger generation that witnessed and took part in the once-unthinkable political sea changes represented by the equal marriage and abortion referendums, other historic events may not seem so far-fetched.

And in an indirect way, the issues are linked. At the celebrations in Dublin Castle when the result of the abortion referendum was announced, McDonald held up a hand-made sign with a double meaning. It read: “The North is Next.”

Sinn Féin’s performance in polls is historic, but should not be read as a guarantee the party will end up in government. The fact that the party is running only 42 candidates reflects the limitations on how fast it can grow.

In Ireland’s single transferable vote, proportional representation system, national percentages of support are flawed predictors of ultimate seats. Each constituency is a unique election battle, and many seats are decided by voters’ second, third or fourth choices on their ballot.

Being a divisive party is unhelpful. Sinn Féin’s left-wing economic policies and past association with violent republicanism make it unpopular with older voters.

For some Fianna Fáil and Fine Gael voters, preventing Sinn Féin from getting into power would be a popular move in itself.

In the past, the party has had a tendency to underperform at the ballot box compared to pre-election polls. This tendency is sometimes thought to be down to its support among the sections of the electorate with the most unreliable turnout tendencies, such as young and working-class voters. (Fianna Fáil, which is popular with older voters, tends to outperform polls.)

For some Fianna Fáil and Fine Gael voters, preventing Sinn Féin from getting into power would be a popular move in itself. It’s possible that the two parties may opt to come together in a governing arrangement once again, perhaps with the support of one of Ireland’s smaller, less controversial parties, such as Labour or the Greens.

UK hardens rhetoric ahead of trade talks with Brussels

German minister calls for ban on events with...

All joking and impeachment aside, Zelenskiy still hopes...

MEPs tackle rule of law in Bulgaria as...

Where can I go on holiday? Here’s the...

Extinction Rebellion activists chain themselves to gates in...